Just Say NO to EU

With an avg. 1.2M voters per MEP & Britain having only 8%, if united, say. The EUropean Parliament has no ability to make policy and has a Commission of unelected bureaucrats, thus clearly the EU is not even a pretence of being a democracy; yet it is willing to slaughter people in Sovereign States to impose democracy on them!
The imposition of a Government and policies upon its vassal regions such as the peoples of Greece shows just how far from being a democracy the EU is.There will be little or no change in Britain’s economic position, when we leave the EU and by then being a part of the Eropean Economic Area all will benefit, as we secure trade relations with the EU vassal regions and can trade and negotiate independently on a global stage.
One huge benefit will be that we can negotiate with bodies like the WTO, UN, WHO, IMF, CODEX and the like, directly in our own interest and that of our partners around the world in both the Commonwealth and the Anglosphere at large; rather than having negotiations and term imposed by unelected EU bureacrats.
The greatest change and benefit will be political, as we improve our democracy and self determination, with the ability to deselect and elect our own Government, which with an improved Westminster structure, see >Harrogate Agenda<.
How we go about the process of disentangling our future well being from the EU is laid out in extensive, well researched and immensly tedious detail see >FleXcit< or for a brief video summary CLICK HERE

. Re-TWEET my Twitterings
& Publicise My Blogs
To Spread The Facts World Wide of OUR-ENEMY-WITHIN
& To Leave-The-EU 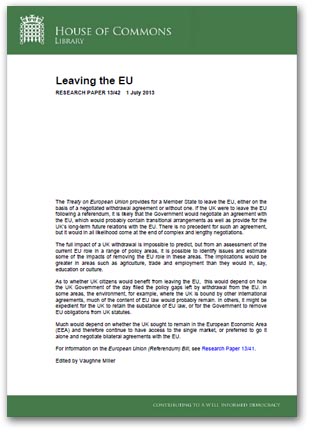